The Cookery Book of Lady Clark of Tillypronie

Lady Clark of Tillypronie collected and made notes on hundreds of recipes between 1841 and the day she died in 1897. Her well-travelled childhood and life as the wife of a diplomat exposed her to a wide variety of foods and influences before she moved back to Scottish Highlands — Tillypronie is in the Grampians inland from Aberdeen. Her husband arranged for her collection of recipes to be assembled into a book following her death and described her as a ‘widely-read woman, gifted with fine literary taste and judgement.’
Edited by

Geraldene Holt is an internationally acclaimed food writer. The distinguished American author, M.F.K.Fisher, has written: “I can think of only three English women who write even comparably well about a common subject, food. They are, of course, Elizabeth David, Jane Grigson and Geraldene Holt.” After a successful career as a studio potter and teacher, Geraldene Holt began to write about food as result of selling her home-made cakes on a West Country market stall. Her work has been translated into eleven languages and her award-winning books on herbs have sold almost half a million copies. Geraldene Holt divides her time between Saint Montan in the south of France and Oxford, England. She is Chairman of the Jane Grigson Trust, an educational charity, and in 1999 she was elected Vice President of the Guild of Food Writers.

This is a book of culinary ideas and quite unlike any other cookery book. Lady Clark collected and made notes on hundreds of recipes from 1841 until the day she died in 1897. The notes were kept for her own use, and give the best picture of household life for the nearly sixty years they cover. Whenever she came across an interesting or unusual dish she asked her hostess, or the cook, how it was made. The recipe was then tried at Tillypronie and noted if it really worked.

After her death her husband, Sir John Clark, asked Catherine Frere to make a selection from 16 large notebooks and many loose notes, which she duly did — discarding any recipes that had been published elsewhere –and the book appeared in 1909. The original edition had the recipes arranged in alphabetical order but the current Southover edition has seen them categorized into topics such as Soups and Broths (150 for soups alone), Sauces for Fish, Cheese and Cheese Dishes, for example, making it a treasure trove for cooks looking for variations on a theme. There are twenty ways of cooking salmon, 18 for rabbit, 19 for haddock and so on, some receipes calling for slow cooking, some very quick. There are also Italian influences reflecting the author’s time married to a diplomat and living in Turin.

The first and only edition was long used by those lucky enough to own a copy and is still prized by collectors. It was not until Elizabeth David mentioned Lady Clark in her books and printed some of her recipes that her name reached a wider public. 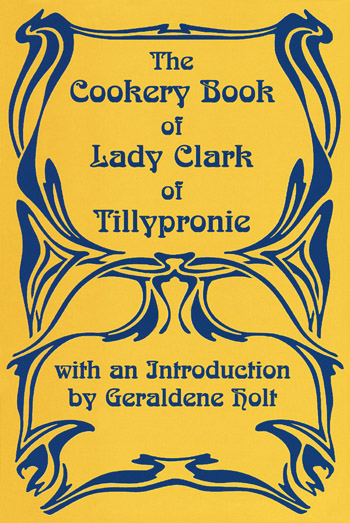 An excellent addition to your food library Sue Dyson and Roger McShane, www.foodtourist.com 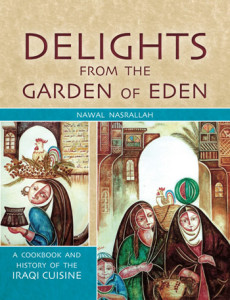 Related Interest
Delights from the Garden of Eden
Nawal Nasrallah