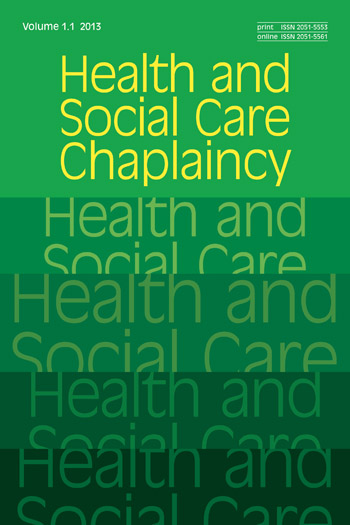 Linda Ross is a Professor of Nursing (specialising in spirituality) at the University of South Wales. Her PhD in 1992 was the first to explore nurses’ perceptions of spirituality and spiritual care which she published as a book in 1997. She has published extensively on the subject of spirituality, contributing to numerous texts such as the ‘Oxford Textbook of Spirituality in Healthcare’ (Cobb, Rumbold & Puchalski, 2012) and ‘Spiritual Assessment in Healthcare Practice (McSherry & Ross, 2010). For the last 30 years such has led numerous research studies on spiritual care in both nursing practice and nurse education, as well as leading training workshops and seminars for healthcare staff internationally. She contributed to the Royal College of Nursing’s ‘Spirituality in nursing Care: a pocket guide’ and ‘Spirituality in nursing care on-line resource’, and to the spiritual care guidance which accompanies the Welsh Government’s Health and Care Standards (2015). She is a founding member and Secretary for the British Society for the Study of Spirituality and an Executive Editor for the Society’s affiliated journal ‘Journal for the Study of Spirituality’. She is also a founding member of the European Spirituality in Nursing Research Network which is currently leading an Erasmus funded 3 year project to establish best practice in spiritual care nurse education across Europe (www.epicc-project.eu).

Before becoming Director at Chaplaincy for Methodist Homes in June 2017, Chris Swift was Head of Chaplaincy at the Leeds Teaching Hospitals where he served from 2001. Between 2004 and 2007 he was President of the College of Health Care Chaplains. Since obtaining his PhD in 2005 from the University of Sheffield he has continued to research and publish and was instrumental in establishing the MA in Health & Social Care Chaplaincy at Leeds Metropolitan University in 2011. Chris is a module leader on the MA and also holds an honorary research fellowship at the University of Leeds. He is a member of the editorial board for the Christian social responsibility journal, Crucible, and has served on the editorial team of the UK's Journal of Health Care Chaplaincy for many years prior to the agreement to publish Health & Social Care Chaplaincy.

Dr. Lindsay Carey, MAppSc, PhD, is Head of Public Health Major and Course Adviser for the Health Sciences program at La Trobe University, plus Senior Research Fellow with the Palliative Care Unit, School of Psychology and Public Health at La Trobe University, Melbourne, Australia. Dr. Carey's research interests include quantitative and qualitative research, public health, pastoral care, spirituality, palliative and aged care, death and dying, religiosity and health, the sacralization of identity process and occupational epidemiology. He first commenced tertiary teaching and research in 1989 with the Lincoln Institute of Health Sciences (Melbourne) and then from 1992 with the School of Public Health, La Trobe University (Melbourne). He has served as Research Fellow for the Caring for Caregivers Program (Victoria), Research Fellow with the Royal Australian College of General Practitioners (RACGP) Evaluation Program, Chaplaincy Research Fellow with the Pastoral Care Department of the Northern General Hospital (Sheffield, UK), National Research Fellow with the Australian Health & Welfare Chaplains Association (AHWCA) and Senior Research Chaplain for the ADF Joint Health Command. In 2010 he was made a Life Member of 'Spiritual Care Australia' and an Honorary Scholar with the Centre of Spirituality, Theology and Health at Duke University (US). He has twenty five years of pastoral care experience and research in parish and chaplaincy settings (including industrial chaplaincy, welfare chaplaincy, health care chaplaincy and defence force chaplaincy). He has also fulfilled appointments as an ethics committee member with Austin Health (Melbourne) and the AHWCA. He is Co-Editor of the international journal 'Health and Social Care Chaplaincy' (UK) and an editorial board member of the international 'Journal of Religion and Health' (US). Dr. Carey has conducted or assisted with pastoral care and chaplaincy research within a number of different contexts across Australia and New Zealand and authored / co-authored over 100 journal publications with regard to chaplaincy and pastoral care. Dr. Carey is ranked by SCOPUS (2019) as being in the top five of international chaplaincy researchers and was recognised in 2018 and 2019 as the National Field Research Leader in Australia for 'Religion and Health'. He has presented as a conference speaker in Australia, New Zealand, England, Ireland, Slovakia, the United States and was co-awarded the 'Sir Edward Weary Dunlop Award' (2019) for research into moral injury and veteran health. He has supervised post-graduate students researching in palliative care, pastoral care, chaplaincy, bioethics, spirituality and religion. Researchgate URL: https://www.researchgate.net/profile/Lindsay_Carey

Health and Social Care Chaplaincy is a peer-reviewed, international journal that assists health and social care chaplains to explore the art and science of spiritual care within a variety of contexts. The journal was founded in 2013 through the merger of the Journal of Health Care Chaplaincy (issn:1748-801X) and the Scottish Journal of Healthcare Chaplaincy (issn:1463-9920) . It continues to be the official journal of the College of Health Care Chaplains and members of the society receive the journal as part of their annual membership. For more details on membership subscriptions, please click on the 'members' button at the top of this page. Back issues of both previous journals are being loaded onto this website (see Archives) and online access to these back issues is included in all institutional subscriptions.

Health and Social Care Chaplaincy is a multidisciplinary forum for the discussion of a range of issues related to the delivery of spiritual care across various settings: acute, paediatric, mental health, palliative care and community. It encourages a creative collaboration and interface between health and social care practitioners in the UK and internationally and consolidates different traditions of discourse and communication research in its commitment to an understanding of psychosocial, cultural and ethical aspects of healthcare in contemporary societies. It is responsive to both ecumenical and interfaith agendas as well as those from a humanist perspective.

The journal focuses on ensuring that chaplains have the essential knowledge, skills and character required to perform chaplaincy services in a range of health and social care contexts. It fosters ethical practice; enhanced discourse and communication skills; philosophical and critical understanding; proficiency in assessment, intervention and evaluation; research literacy; team working and awareness of the contribution of other disciplines in the delivery of health and social care. It enables chaplains to offer staff support, enhance organisational spirituality and contribute to health and wellbeing in their communities.

The journal strives to bring the best practitioners and academics in the field into critical dialogue and also sets aside a place to encourage first time authors and reflective practitioners.

The editors are supported by an international, interdisciplinary advisory board.