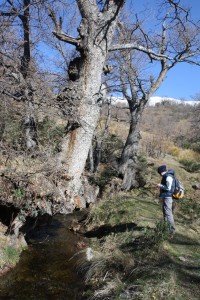 In January 2014 the University of Granada (Spain) launched the Project MEditerraneanMOuntainous Landscapes: a historical approach to cultural heritage based on traditional agrosystems (MEMOLA), funded by the 7th Framework Program of the European Commission.

Partnering with the University of Granada are ten other entities, including private companies and universities and research institutions from five different countries. In the next four years four mountain areas of the Mediterranean will be studied: Sierra Nevada (Granada, Spain), ColliEuganei (Padova, Italy), Trapani Mountains (Sicily, Italy) and Vjosa Valley (Albania). The aim of this project is to analyse the cultural landscapes of these areas with a focus on the changes of the relationships between human communities and natural resources (and particularly land and water use) fromLate Antiquity until today. The dynamics modelling landscapes and their structures are conditioned to guarantee the sustainability of rural communities across time. In many regards, we can understand landscapes as the spatial representations of the social relations that control systems of production. Landscape construction is based on strategies of production and reproduction of societies, each one with a different set of characteristics, throughout history. Therefore, research on the historical processes that have shaped a particular relationship with the environment (i.e. the processes of extraction and use of natural resources) is needed to understand landscapes in their entirety. The historical uses of natural resources have strongly impacted the physical environment and have generated not only landscape forms, but also the cultures that made their management and sustainability possible until today. This diachronic study will provide patterns of sustainable behaviour and of rational use of exploitation and management of resources.

The four study areas have a different historical past that has configured their landscapes. In three of them the Islamic fingerprint is quite visible: the Andalusian period of Sierra Nevada, in southeastern Iberia, between the 8th and 15th centuries and continuing into the 16th (Morisco period); the Arab-Berber conquest of Sicily in the 9th century; the Norman conquest of the 11th century and the 13th century expulsion of the Muslim population from the island; and the Ottoman domination of southern Albaniabetween the 15th and 20th centuries.
Project foci of 2014 related to Islamic archaeology include:

1. In Sierra Nevada, a study of the Andalusian irrigation systems, which consists of a complex and extensive hydraulic network and thousands of hectares of cultivated land, was launched. Last February one of the old acequias (canals), abandoned more than twenty years ago, was recuperated: the BarjasAcequia. It took more than 200 volunteers and the support of the irrigation community, but the acequia is now working in the village of Cáñar. Restoration of the canal provides the opportunity to study the impact of irrigation in an area of high ecological value inside the Protected Space of Sierra Nevada. The collaboration of hydro-geologists, geologists, environmentalists and agronomists in the project will allow the study of underground water, soil formation in the irrigated terraces,and fertility of the land and, above all, an evaluation of the impact of the recuperated acequia in the area (http://www.memolaproject.eu/node/381)

2. Archaeological excavations began in the village of Lanteira, in the northern Sierra Nevada. The area of excavation was defined by two concentrations of surface ceramics which former studies had related to two old hamlets of the Andalusian period, abandoned in the 12th century (Benizahala and Benahaque in old documents), and in a terraced, cultivated area where some storage pits were found. Research on those pits was the main aim of the activity, as their archaeobotanical remains can be analysed to identify the cultivated plants, to understand the environmental context, and to shed light on the ways cropping has changed historically until today. Once the data is collected, the agronomists and botanists working in the project will process them to establish criteria on the potential of current species for cultivation in relation to soils, varieties within the species and, especially, market demands. The resultsof their collaborative analysis will be made available to the public as guidelines for the support of farmers in the area. The results of the excavation thus far have been very interesting and have yielded relevant information for the project in the next months. A total of five storage pits in a domestic area have been found. A burial area has also been excavated, and the skeletons found there will be subject tobioarchaeological analysis for any information they may shed on the diet of the time.

3. Archaeological investigations of the Trapani Mountains in Sicily (Italy) last year included surveys in the areas of Calafatimi-Segesta, Salemi, Vita and San Vito lo Capo, in addition to an archaeological excavation. The aim of the surveys was the documentation of Islamic settlements using criteria that have been defined in previous projects. The location of water sources and springs, the topography of the landscape and the toponymy of the area have been carefully studied, and settlements of the Islamic period in the island have been identified. The archaeological campaign was developed last November in the site of Pizzo Monaco (Custonaci, Trapani). This site, documented in local sources, is surrounded by a wall of considerable dimensions and contains around fifty small cells of various sizes. Its physical characteristics, its name and some written references suggest that the site could be a fortified granary (aghadir) of the Islamic period. The excavation, conducted by MEMOLA members, has documented five structures containing ceramics, archaeobotanical remains and soil samples that are now under analysis by members of the CSIC (National Research Council of Spain) and the University of Palermo. 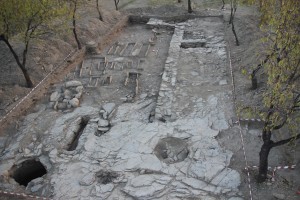 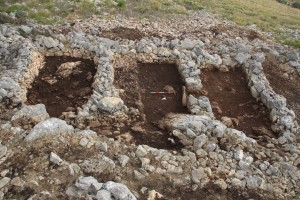