The following is the editorial from the special issue on G.I. Gurdjieff, edited by Carole M. Cusack, published in Journal for the Academic Study of Religion, 27.3 (February 2015).

George Ivanovitch Gurdjieff (c. 1866-1949) is often spoken of as one of the three foundational figures of both new religious movements (NRMs) and modern ‘secularised’ esotericism. His teachings have been accorded significant influence on the ‘New Age’, yet he is far less studied than the two other foundational figures, Madame Helena Petrovna Blavatsky (1831-1891), co-founder (with Colonel Henry Steel Olcott) of the Theosophical Society, and Rudolf Steiner (1851-1925), founder of Anthroposophy. Much of Gurdjieff’s biographical narrative is uncorroborated, and his teaching (the ‘Fourth Way’, or the ‘Work’) is similarly contested in terms of its origins and content, with some scholars positing Christian, Sufi, Buddhist, and Hindu sources, while others insist that the ‘system’ is unique to Gurdjieff and has no discernible antecedents. A second area in which the ‘Work’ is controversial concerns its scholarly classification; is Gurdjieff’s teaching a religion, a form of spirituality, or a type of esotericism, or none of the above? How might these questions of status be resolved? The academic study of Gurdjieff has been slow to develop, in part due to the secrecy surrounding the ‘inner’ content of the teaching and the esoteric model of master-pupil transmission practiced after Gurdjieff’s death within ‘official’ Foundation groups led by his nominated successor Jeanne de Salzmann (1889-1990). Insider accounts that favour a sui generis treatment of the ‘Work’ still dominate publications about Gurdjieff and his followers (in particular, pupil memoirs that either paint portraits of Gurdjieff or that discuss the spiritual struggles of the author in often frustratingly vague terms), though academic treatments have begun to emerge in recent years. This special issue of the Journal for the Academic Study of Religion features six articles that address questions including: Gurdjieff’s sources, spiritual aims, and teaching techniques; the scholarly placement of Gurdjieff in Religious Studies; the orthodox and heterodox continuations of the Gurdjieff teaching; and the various cultural products of the Gurdjieff milieu.

The first article, Steven J. Sutcliffe’s “Hard Work: Locating Gurdjieff in the Study of Religion/s,” is focused on the difficulties attendant upon attempts to place Gurdjieff in the disciplinary field of Religious Studies, and functions as a scene-setter for the issue. Sutcliffe considers three approaches to Gurdjieff: the more or less sui generis field of ‘Gurdjieff studies’; the integration of the Work as new content into existing taxonomies of religion/religions; and as a type of cultural production within the frame of social history. While the first and second approaches may yield some useful data, it is ultimately the third approach that Sutcliffe favours. The second article, “Fasting in Christianity and Gurdjieff,” by Joseph Azize discusses the important role that fasting played as a means of ‘self-remembering’ for Gurdjieff, and highlights the significance of eating (both literal human physical eating, and also the cosmological notion that everything in the universe is either eating or being eaten (in what Gurdjieff termed the ‘Trogoautoegocratic process’) in the ‘Work’. Azize carefuly sifts Gurdjieff’s writings and lecture transcripts, and the testimony of key pupils for references to fasting and its meaning for Gurdjieff, and its application as a training method.

The next contribution is by Vrasidas Karalis, and is focused on the second book of the All and Everything series, Meetings With Remarkable Men (1963). In “Situating G. I. Gurdjieff’s Meetings With Remarkable Men” Karalis focuses on the literary strategies of the text, which have been neglected to date. This is because Meetings is generally analysed in two ways: it is viewed in terms of Gurdjieff’s biography, and mined for facts about the chronology of his life; commentators also attempt to reconstruct the geography of Gurdjieff’s travels, seeking the sources of his teaching. Rather, Karalis investigates the genres to which Meetings is related, and the determinedly indeterminate way that the voice of the narrator (who is separate from Gurdjieff the author, and also from the historical Gurdjieff) speaks of the pursuit of secret knowledge, yet no secrets are revealed. The fourth article, Carole M. Cusack’s “Gurdjieff and Katherine Mansfield Redux: Alma de Groen’s The Rivers of China,” re-examines the relationship between Gurdjeff and the short story writer from New Zealand, Katherine Mansfield, who died of tuberculosis at the Institute for the Harmonious Development of Man at Fontainebleau-Avon on 9 January 1923. The facts are well known, but the article breaks new ground by bring the play The Rivers of China by the New Zealand playwright Alma de Groen, which has the Gurdjieff-Mansfield story as one of its paired narrative arcs, into the mix. There is a limited amount of theatre and literary scholarship on de Groen’s oeuvre, but her play has to date not been brought into dialogue with Religious Studies approaches to the Gurdjieff tradition. It is also significant as it is one of very few fictional portrayals of G. I. Gurdjieff in existence.

The fifth article in the issue is by Johanna Petsche, and analyses the life and teachings of an unorthodox American ‘guru’, Eugene Jeffrey Gold, who founded the Institute for the Development of the Harmonious Human Being (IDHHB) in imitation of Gurdjieff, and whose life and self-presentation involve deliberate jokes, fraudulent photographs, and other amusing take-offs of Gurdjieff. Gold has to date received limited academic attention and Petsche’s article is a welcome contribution to the academic documentation of the ever-growing heterodox and fringe spiritual milieu that the ‘Work’ has spawned. The final contribution is David Pecotic’s examination of Jodorowsky’s cult film The Holy Mountain (1973), which has often been identified as an adaptation René Daumal’s unfinished novel, Mount Analogue (1952). Pecotic’s “Mountains Analogous? The Academic Urban Legend of Alejandro Jodorowsky’s Cult Film Adaptation of René Daumal’s Esoteric Novel” is a close reading of the two texts, and argues that there are few, if any, common ideological or structural elements, suggesting that the purported relationship between the two is an example of a particular species of ‘urban legend’, one propagated by both scholars and para-scholarly writers.  It is hoped that the articles in this special issue on G. I. Gurdjieff will find a sympathetic and interested audience among readers from all areas of the study of religions, spiritualities, and esotericisms.

My thanks are due to the anonymous referees who read and commentated on the six articles and assisted the authors to improve the academic and literary quality of their work. Gratitude is also directed to the Editors of Journal for the Academic Study of Religion, Douglas Ezzy and Anna Halafoff, for accepting the ‘Gurdjieff’ special issue proposal and for supporting me in my efforts to bring this project to fruition. Finally, my formidably talented research assistant, Venetia Robertson, and my long-suffering partner, Don Barrett, contributed more than either might suspect. This issue is dedicated to you both, for without you it would not exist. 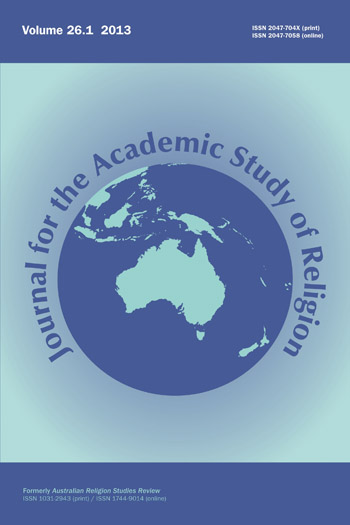