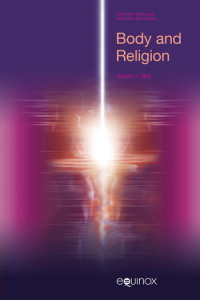 Keywords embodiment; Christian theology; incarnation;
phenomenology; Christology; Bakhtin
There are few texts written in Christian theology today that demonstrate the ambition of Ola Sigurdson’s work. At times breathtaking and at others overwhelming in its sheer size and density, Sigurdson has attempted to
develop a constructive theological somatology in roughly three parts identified in the subtitle. As he notes at the end of the Introduction, his ‘possibly
somewhat utopian hope’ (p. 49) is for the reader to understand the reciprocal, intertextual relationships that exist between the three parts of
the work.

This is a daunting hope as one could argue that Sigurdson’s volume is really comprised of two shorter monographs (on incarnation and the gaze) appended to what might stand as a single longer monograph in itself (on
embodiment). The length, level of technical detail and scope of the volume make it hard to imagine this work being used by anyone except scholars. One could imagine using selected chapters for graduate level coursework,
but such divvying of the text cuts against the authorial hope for the reader to appreciate the intertextual relationships. However, there is no question that this volume will be essential for any serious scholar of Christian embodiment. For such a reader, Sigurdson has done us a great service by collecting his insights in a single tome, as it seems certain his work will become an inescapable compendium for future scholars wrestling with issues of Christian embodiment. More specifically,
by developing the constructive potential of somatology in terms of historical and phenomenological threads – treated as the traces of a Christian somatology’s creative development – that interact within streams of theological traditions, Sigurdson develops a critical dialogue from which systematically significant conjectures about the theological significance of the body can be launched. Put slightly differently, by developing the meaning of the body for Christian theology with an eye both to what the body is as it appears and in its appearing, Sigurdson’s work becomes a platform from which to examine the body across the variegated horizons of its potential systematic theological implications.

Any brief summary would do injustice to the richness of Sigurdson’s research and the considerable attention to detail that he offers. Spanning biblical scholarship, contemporary phenomenology, elements of ritual studies and major figures in systematic theology, this work is encyclopedic in a classical sense: bringing us round and round to recurring motifs in order to give us a richer sense of how the body might be constructively figured in Christian theology. At best, I will here only trace the connections between the major sections of his text to encourage readers to realise Sigurdson’s utopian hope for the work. His analysis of the incarnation makes the case that conceptualising the Christ’s humanity as an aspect of Christology is inseparable from any thoroughgoing account of theological anthropology. Sigurdson argues these doctrines must be in critical correlation to one another and, at least implicitly, perhaps always have been in such correlation: making the case that the conceptual categories developed from the New Testament and the early church on Christology correlate to existential concerns rather than speculative metaphysics. However, this is not to suggest one might give an account of the humanity of the Christ strictly on these early church terms. Contemporary accounts of incarnation must take stock of the demands of contemporary theological anthropology – particularly as this relates to issues of human subjectivity, embodiment and sociality – that characterise our human mode of being-in-the-world if it is to remain relevant and resist
simple abstractions. This takes us directly to Sigurdson’s account of the gaze, where he attempts to develop a theology of the gaze rooted in a phenomenological sense of being-in-the-world. Repeatedly, he emphasises that the power of the gaze rests in an indissoluble connection. What we see and how we see it cannot be separated from how we come to see. Thus, the gaze is never merely passive, but characterises an active way of establishing relationships in the midst of the world. His theological account of the gaze then resists any transcendental subjectivity that escapes the reality of embodiment or any scopic regime based on a relationship of mastery or control over the world. Instead, he develops a ‘gaze of faith’ that constitutes a theological way of both understanding and relating to existence: a Christian scopic regime formed by liturgical habitus that shapes both what we see and how we see. In short, this is a gaze configured to the reality of the incarnation: making the case that how God’s presence appears in our midst is correlated by the habits of gazing to the existential concerns of diverse human beings.

The gaze of faith in Sigurdson’s work is an involved gaze that shapes us in our perception of the world so that we are attuned to the appearance of the paradox of transcendence and immanence that the incarnation promises can appear throughout existence. The final part is the most daringly constructive, and longest, of the sections. Comprised of five chapters, this second half of the work reads like a monograph in itself: his chapter ‘The Philosophical Body’ serves as a propaedeutic to the outlines of a theological method established in ‘The Liturgical Body’ that is finally extended and constructed through his treatments of the erotic, the grotesque and the eschatological in the closing chapters. Yet themes from his accounts of incarnation and the gaze continually reappear here as Sigurdson sets to the task of developing a both constructive
and critical Christian somatology. However a Christian somatology might be developed, it must deal with the contemporary philosophical turn by which the body is more than a mere object. Sigurdson pursues this philosophical turn in a specifically phenomenological vein – a dense literature that he wades through while providing admirable clarity to the reader. As such, he suggests the body is a living body without self-evident boundaries. It is shaped through performance and intertwined with discourses and institutions by which it is socially constructed. Sigurdson is careful to emphasise that this does not entail the dissolution of materiality or the physical body; rather it is to claim that the body is lived into. The materiality of a body inescapably intertwines with the discourses configuring representations of the body that exist through the figuring and performance constituted in the particularity of my lived-body. Thus, developing a theological understanding of embodiment requires considering how the liturgical habits of the ‘gaze of faith’ construct and constitute the body as a particular constellation of relationships between the social-discursive dimensions representing the body and the existential-individual dimensions of the lived-body. Consequently, Sigurdson turns to the erotic and the grotesque. The erotic stands not only for sexuality in his work but ‘the horizon of sexuality, a horizon that also covers human relationality in general’ (p. 477). In this horizon, the erotic body becomes a cipher for how desire – specifically, desire for liberating relationships – is to be cultivated through the particularity of our embodiment. Here, the full force of Sigurdson’s rich mining of
theological traditions is on display as he makes the case for the erotic body being one that both cultivates and communicates a sense of vulnerability before the presence of God and neighbour that forms a mutual intimacy
between my lived-body and other bodies. Sigurdson furthers this openness to mutual intimacy by taking up the grotesque, which follows on Mikhail Bakhtin’s distinction between the classical and the grotesque. For Bakhtin, the classical body denotes a completed or whole individual with fixed bodily boundaries and a pervading sense of impenetrability. The grotesque body, by contrast, is one that is excessive and generative, consistently transgressing its own boundaries and interweaving with other bodies around it, thereby paralleling the mutual intimacy Sigurdson seeks in reflecting on the erotics of the body. In transgressing its own boundaries, the grotesque body never stands steadfastly alone and is perpetually being morphed or transformed. Developing the grotesque into a theological category, Sigurdson argues that the Christ’s body – in its crucifixion and resurrection – is a grotesque body that Christians come to emulate through adopting the gaze of faith. The consequence, though, is that the resurrected body – as the aim of Christian eschatological hope – cannot be a fixed or impenetrable end (as it would then be a  classical body and not grotesque). If the resurrected body is grotesque, then a systematically consistent understanding of resurrection must apply to the ongoing formation of mutual intimacy with other bodies that transforms our way of existing with our neighbour. The grotesque resurrected body then figures resurrection as ‘neither an individual nor an entirely future phenomenon’ (p. 572).

Beyond issues of embodiment, there are many facets of Sigurdson’s text that should appeal to theologians and scholars of Christian history alike. Certainly, the summary above scarcely touches on the breadth of source material considered in the volume, but to suggest that this is all
the summary misses is too modest. We can also read Sigurdson’s text as a model for what he calls ‘academic theology’: a form of thinking that is both critical and constructive in illustrating how theology can both be more than mere apologetic, confessional thinking on the one hand or a series of historical critiques on the other (pp. 31–7). Instead, theology in his text pursues a careful consideration of the history of doctrinal effects on concrete life-worlds. Read this way, the topics of incarnation, gaze and embodiment are ancillary – simply examples for how theological thinking might be pursued regarding any concept affective of life-worlds – and the text is a primer in developing a contemporary correlational method. In this sense, the importance of Sigurdson’s work is that it exemplifies a way forward for systematic theology (and for ‘theologies’ developed in other various religious traditions) to be pursued as a discipline in the modern academy, distinct from other more specifically historical or sociological approaches to the study of religion. Certainly, this is not the primary intention of the work. Nonetheless,

Heavenly Bodies may serve as a model for other Christian theological scholars writing on radically different topics that venture into the fraught nexus to which ‘academic theology’ speaks. Sigurdson’s text sets a standard to which other accounts of the body in Christian theology will have to refer. The significance of this work is unlikely to fade any time soon because of its philosophical erudition and meticulous historical considerations. Yet for the attentive reader willing to mine the text as a whole – to search out the connections between the parts that might seemingly stand alone – this work opens a way to knowing our bodies in new and surprising ways. Sigurdson makes it undoubtedly clear that the bodies of Christians are not self-defined and that scholars must be sensitive to the religious practices cultivated by living into bodies if we are to understand how one might theologically gaze upon the world intentionally.