Steven Engler is professor of Religious Studies at Mount Royal University in Calgary, Canada. He teaches a variety of courses and research popular Catholicism, Umbanda, Kardecist Spiritism and related spirit-incorporation religions in Brazil, as well as theories and methodology in the study of religions.

The book problematizes the use of ‘tradition’ as a synonym for ‘religion.’ It engages critically with important theoretical works, ranging from Robert Redfield’s Peasant Society and Culture (1956), Edward Shils’ Tradition (1981) and Hobsbawm/Ranger’s The Invention of Tradition (1992) to Pascal Boyer’s The Naturalness of Religious Ideas (1994) and Harvey Whitehouse’s Modes of Religiosity (2004). It reviews the small but growing list of publications reflecting on this category in the study of religions itself. Discussions and arguments are illustrated with examples from a variety of religions, including Catholic, Protestant and Orthodox Christianities, Judaism, Islam, Buddhism, Candomblé, South Pacific cultures, and different western esoteric streams (not least Traditionalism).

Series: Concepts in the Study of Religion

Talking Tradition [+–]
This chapter will illustrate the bewildering range of uses of ‘tradition’ in the study of religion, using a selection of introductory textbooks. The goal is to show that clarity is needed and that various problematic assumptions are lurking.

Tradition’s History [+–]
This chapter will review the various meanings of religion, in the rich dictionary sense. A historical overview will show the long-standing link between tradition as history and religion, for example in the Roman typology that classified Judaism and pagan systems as religio and Christianity as superstitio. The goal is to highlight the issues that will inform later theoretical discussion: origin, transmission, truth, authenticity, identity and perception. (The main examples here will be Catholic and Protestant Christianities.)

Tradition as Cultural Transmission [+–]
This chapter will review theoretical approaches that look at tradition in terms of cultural transmission (cultural memory, epidemiology of representations, functionalist views from sociology, and cognitivist views within the study of religion). It will critique these views’ implicit assumptions about truth and representation (the accuracy of relations between the putative origin and the later reception of tradition). The goal is to make a case that, despite their importance, these approaches are not the most useful or relevant for the study of religion: an ideology-critical approach captures other issues that, I will argue, are more central.

The Invention of Tradition [+–]
This chapter will review the concept of ‘the invention of tradition,’ drawing on the critical literature and on a wide range of examples from various religions in three edited collections that constitute the relevant literature in our field (van Henten/Houtepen 2001; Engler/Grieve 2005; Hammer/Lewis 2007). It illustrates a core methodological tension: between investigating whether tradition is true to its origins/transmission (real as opposed to invented) and investigating how tradition is portrayed and received as true (making the invented ‘real’). The key claim is that (just as with religious beliefs more generally) what matters about tradition is not its actual but its perceived authenticity. The goal is to make a case that the latter approach is more valuable because it takes into account issues of power and ideology. (The main examples here will be from indigenous traditions, especially in the South Pacific.)

A Relational Model of Tradition [+–]
This chapter will argue that tradition is best thought of in terms of a family of oppositions (ancient/modern, received/invented, imitative/creative, static/dynamic, unitary/plural, universal/particular, continuous/discontinuous etc.) that do their ideological work through alignment with various normative distinctions (true/false, authentic/inauthentic, orthodox/heterodox etc.). The goal is to further undermine essentialist views of the concept. (Various examples will trace relations between these ideas of the sociological categories of authority drawn from Weber: priest vs. prophet.)

Tradition’s Gift [+–]
This chapter will clarify tradition’s relation to temporality through exploring the metaphor of tradition as a gift from the past (or from the divine). It highlights tradition’s conservatism, (i) as it engages those in the present in relations of reciprocity with an idealized (or illusory) version of the past, while at the same time (ii) doing this work by means of misrecognition. That is, the reception of tradition is portrayed as a passive repetition, which ignores tradition’s ongoing invention. This obscures its ideological dimensions and their relation to issues of identity construction. (The main example here will be the Brazilian spirit-possession religion, Candomblé.)

Tradition Deferred [+–]
This chapter argues that the central ideological effects of tradition are achieved by framing framing beliefs, practices, institutions etc. as independent from intentional agency: i.e., as passed down unchanging, not as constructed, negotiated, modified, etc. Strong parallels with the work of ritual will be briefly explored. This highlights the gap between tradition as social and cultural construct and tradition as unaltered gift from the past, from a trans-historical origin, from a deity, etc. The goal is to point out that this gap offers a privileged site within which conceptions of the sacred, the divine, etc. can be projected or constructed. (The main example here will be Orthodox Christianity.)

Revising our ‘Traditions’ [+–]
This chapter will argue—beginning to pull the book’s threads together—that scholars of religion\s should avoid essentializing tradition by uncritically assuming that religions are static or bear a privileged relation to the past. The concept of tradition will be shown to be at the heart of tensions between religionist and critical/historical approaches in the study of religion, in the sense that the conceptual tensions brought out in the previous chapters are echoes in those debates within the field. (The main example here will be Traditionalism, an early twentieth-century western esoteric current.) 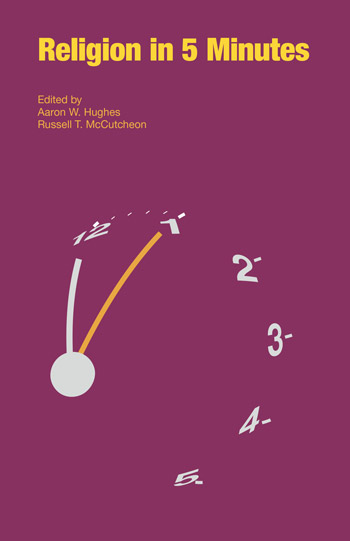