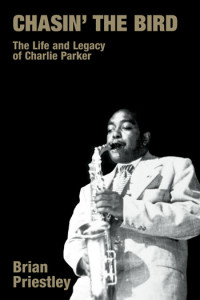 Brian Priestley is the co-author of The Rough Guide to Jazz, now in its fourth edition, and the biographer of Charles Mingus and John Coltrane. He is a jazz pianist of note, specialising in the Ellingtonian repertoire, and has several CDs to his name. He is also a critic and reviewer for numerous magazines including Jazzwise, and a regular broadcaster on BBC Radio 3.

The mythology of Charlie Parker was already growing during his lifetime and it is hardly surprising that, given the combination of his musical abilities and his often scandalous behaviour, he attracted particular interest. In the hours and days after his death, the groundwork was laid for him to become an equally extraordinary gure posthumously. Within the year, there was evidence of the beginnings of a serious appraisal of his music. Metronome magazine’s Jazz 1956 yearbook included a Parker history by Bill Coss and a transcription and commentary by clarinettist Tony Scott, and the same year saw the English-language publication of André Hodeir’s essay (written before Charlie’s death) in his book Jazz: Its Evolution and Essence. There was even interest on the part of television in the late 1950s, with a documentary by CBS-TV entitled The Mythical Bird on their Sunday morning slot Camera Three. And, by 1957, it was possible for writer Orrin Keepnews to talk of no fewer than four forthcoming books about Charlie. Also in the late 1950s, the record industry started to reap the rewards which had not always been forthcoming during Charlie’s lifetime. The chapter goes on to document the artists's evolving legacy and influence up to the present day.