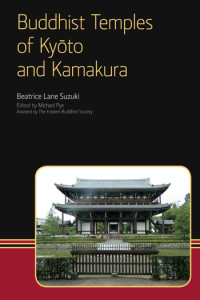 Beatrice Lane Suzuki (1878-1939) was an extremely well informed and sensitive expositor of Mahāyāna Buddhism. As the American wife of the influential Zen Buddhist Suzuki Daisetsu, she lived in Japan for many years, becoming very familiar with the leading temples of various Buddhist schools—especially in Kyōto and Kamakura. Buddhist Temples of Kyōto and Kamakura brings together some of her writings from The Eastern Buddhist . The collection preserves valuable information from Suzuki’s own times and the charm of her personal discovery of the temples described here. Further information is also provided to place them in their current context. The volume will be of interest to scholars of Japanese Buddhism and to the many travelers to these sites today. In this chapter, the editor discusses the life and career of Beatrice Lane Suzuki as a Mahāyāna Buddhism expositor, as well as explaining the structure of this book.