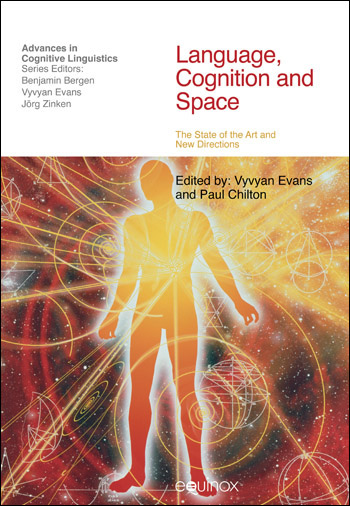 Language, Cognition and Space - The State of the Art and New Directions - Vyvyan Evans

Language, Cognition and Space - The State of the Art and New Directions - Vyvyan Evans

Paul Chilton is Professor of Linguistics at Lancaster University. He has published widely in the areas of cognitive linguistics and discourse studies. His previous books include Security Metaphors: Cold War Discourse from Containment to Common European Home and Analysing Political Discourse: Theory and Practice. His most recent articles explore a geometric approach to the deictic concepts of space, time and modality.

Spatial perception and cognition is fundamental to human abilities to navigate through space, identify and locate objects, and track entities in motion. Moreover, research findings in the last couple of decades reveal that many of the mechanisms humans employ to achieve this are largely innate, providing abilities to store ‘cognitive maps’ for locating themselves and others, locations, directions and routes. In this humans are like many other species. However, unlike other species, humans can employ language in order to represent space. The human linguistic ability combined with the human ability for spatial representation results in rich, creative and sometimes surprising extensions of representations for three-dimensional physical space. Language, Cognition and Space brings together nineteen articles from leading scholars who investigate the relationship between spatial cognition and spatial language. This volume represents the state of the art in terms of language and space research and points to new directions in terms of findings, theory, and practice.