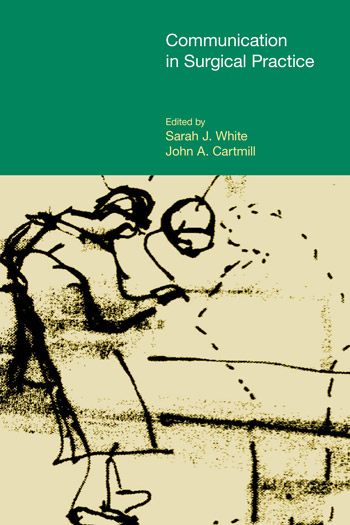 John A.Cartmill is a colorectal surgeon, Associate Dean, Clinical, and Professor of Surgery at the Faculty of Medicine and Health Sciences at Macquarie University.

In this chapter we argue for a reframing of the essential character of surgery as a site of transaction between the realm of matter and the realm of meaning. A very prevalent view of surgery to-date has been to see it as a confrontation between sick tissue in a patient and technical skill in their surgeon – a confrontation played out almost entirely in the world of ‘matter’. Under this view, issues of meaning are given a secondary and supporting role, arising in the discussion of how surgical skills are best taught, or of how to avoid ‘communication breakdown’ that might lead to surgical error. But generally issues of meaning are absent from discussions of what constitutes surgery proper, running smoothly. Recently, some scholarly attention has included a closer focus on meaning – for instance, emphasising how communication in surgery is always situated (Lingard 2011), showing how ‘material’ surgical activities themselves are always jointly accomplished through interaction (Bezemer et al. 2011), and demonstrating how such interaction integrates talk, touch, gesture and other semiotic modes (Moore, Butt and Cartmill 2010, Moore this volume, Bezemer et al. 2011). In our opinion, however, there is value in a more substantial reframing of surgery and its professional, institutional and historical context. What our alternative view offers is a model of surgical practice as an evolved, and therefore robust and adaptive, system where meaning is not outside the system but always in play; an inherent part of the system. Importantly, the robustness and symbolic complexity of such evolved systems contrasts with the relative simplicity and inflexibility of designed systems. This is partly because the former involve not only causal relations but relations of realization (which are explained below). The model has practical payoffs of some significance, such as helping to understand why highly standardized interventions that pertain only to one specific surgical context are often not well received or may not be sustained in the context of the system as a whole. An example could be a management intervention, however well intended, that underestimated the multilayered interlinkage of understandings and meanings that allows the system to function at all. The chapter begins by pointing out shared origins between the fields of semiotics and medicine, then moves from ‘sign systems’ to ‘health systems’, introducing the idea of ‘levels’ of organisation and abstraction in each type of system – in other words showing how each is a ‘realizational’ system. Against this background the chapter then reports on findings from our video-based observational study of surgical interaction, including problems and positive outcomes that the models helps explain and predict.