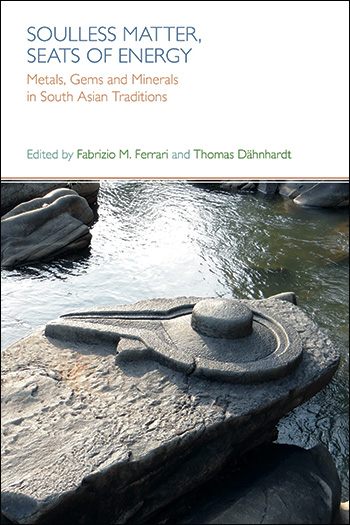 Eleanor Nesbitt is Professor Emerita at the Centre for Educational Studies, University of Warwick.

Today’s Khalsa (nucleus of Sikhs committed to a shared discipline) is a complex of several strands of tradition, each represented vigorously among globally connected Sikh youth. Iron holds a central place in two of these – the Akhand Kirtani Jatha and the Nihangs. Thus, the Akhand Kirtani Jatha’s code of discipline requires the maintenance of sarab loh (literally ‘all iron’), in other words the practice of only using utensils that are made of iron and of only eating from an iron thali (tray, platter). In the case of the Nihangs, their distinctiveness involves a prominent respect for weaponry: the perpetuation of shastar vidya (‘knowledge of weapons’, martial art) and the incorporation of iron or steel martial insignia in their dumala (towering turban) and elsewhere on their person. Moreover, along with the Adi Granth and the Dasam Granth, Nihangs honour as scripture a work entitled Sarabloh Granth (‘all-iron volume’). In the case of a third Khalsa group, the Damdami Taksal, the word taksal (mint in the sense of a coin factory, though translated ‘educational institution’) is in its very title. As with other aspects of resurgent Sikh groupings and observance, the emphasis on metals, and iron in particular, is continuous with much earlier Sikh tradition. So, two of Sikhs’ ten human Gurus, Guru Hargobind and Guru Gobind Singh, were known for their military prowess and leadership. The initiation of Sikhs into the Khalsa involves being ‘baptised’ with sweetened water, stirred in an iron vessel (bata) with a khanda (two-edged sword) and they are required thenceforth to have five distinguishing externals (the ‘five Ks’) of which the kirpan (sword) and kara (bangle-like ring around the right wrist) are made of steel or iron. These are emotive symbols for the many more individuals who identify as Sikh without becoming Khalsa Sikhs. Indeed, along with the ik oankar emblem (combination of numeral and character signifying oneness of God/ reality), Sikhs often display a composite symbol consisting of a khanda, encircled by a kara or quoit and cupped by two kirpans. This chapter will outline varieties of metal-related Khalsa tradition, as well as examining the evolution of the five Ks, and of the nishan sahib. (This is the flagpole and pennant, bearing the khanda emblem, that indicate that a building is a gurdwara, a public place of worship). Sikhs’ emphasis on iron will be contextualised in the light of Guru Gobind Singh’s epithets for ‘akal’ (the timeless one, God) as ‘sarab loh’ and Sikh interpretation of the invocation of Bhagauti in the congregational prayer, Ardas, as an invocation of the sword (rather than of Bhagavati/ the Indic mother goddess). Sikh coins too will be discussed with particular reference to the collection in the British Museum. The imagery of the Adi Granth (Guru Granth Sahib, Sikh scripture) includes many references to metals, minting and money - as well as to gemstones - and these will all be explored as expressions of the Gurus’ teaching that provides the ultimate religious authority for Sikhs. The Guru/divine teacher is declared to be the paras (philosopher’s stone) ‘by whose touch iron is transformed to gold’ (AG 1113) and this trope will be considered further.