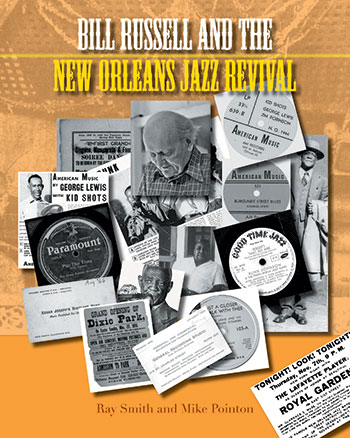 Ray Smith is a jazz musician and writer. He studied with the British jazz pianist Ray Foxley in the mid-1950s and the American jazz pianist Don Ewell in the 1970s. He has recorded extensively as band-pianist and soloist.

Mike Pointon is a jazz musician, writer and broadcaster. He co-authored Goin' Home: The Uncompromising Life and Music of Ken Colyer with Ray Smith. He presented the acclaimed BBC Radio 3 series Bunk and Bill.

Born in 1905, Bill Russell demonstrated diverse musical interests from an early age. Having been a contemporary of John Cage, Henry Cowell and Lou Harrison amongst others, his significance as a percussion composer is well known amongst aficionados. His work as a musicologist of New Orleans jazz music is equally acclaimed. He became the first Curator of the newly formed Tulane Jazz Archives at New Orleans in 1958. He was a major figure in the development of the revival of interest in the music of that City, notably from his recordings of trumpet player Bunk Johnson in the 1940s.This is the first full-length book about Mr. Russell´s life to be largely ´in his own words´. The book is based largely on personal interviews conducted with Russell about the great diversity of his life´s work, interspersed with views and anecdotes about him from his friends and associates written especially for the book, together with archival material. These sources are woven together to give a portrait of an extremely talented, modest man who forsook an academic career to become a champion of the music and musicians of New Orleans.