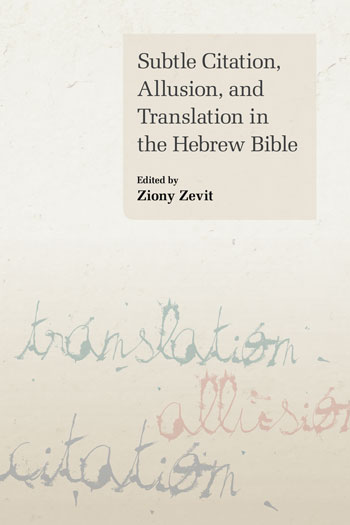 Ziony Zevit is Distinguished Professor of Biblical Literature and Northwest Semitic Languages and Literatures at the American Jewish University. He is recognized for his publications in Hebrew language and linguistics and Israelite religion. He has served on several editorial boards--BASOR, CBQ, HAR, HS-- was Editor-in-Chief of Hebrew Studies for seven years, and is a past president of National Association of Professors of Hebrew. Zevit is the co-editor of Diachrony in Biblical Hebrew (2012) and his most recent book What Really Happened in the Garden of Eden? was published in 2013. He is the recipient of fellowships from the Rockefeller Foundation, Lady Davis Foundation, and the John Simon Guggenheim Memorial Foundation. During the 2013-14 academic year Zevit served as Seymour Gitin Distinguished Professor at the W.F. Albright Institute for Archaeological Research.

Biblicists have long been aware that some compositions in the Bible cite and allude to other compositions. At times these practices are obvious; often, however, they are not. Essays in this volume focus on subtle, not-so-obvious, unrecognized cases of citation and allusion as well as on unrecognized ‘translations’ from other languages and references to motifs in the plastic arts. Individual authors address unapparent cases and the methodological considerations on which their status as ‘genuine’ can be established. The essays in this volume are significant because of the methodological considerations and cautions that they describe and the varied texts that they analyze. Biblicists drawing on insights from this book will be able to provide thicker descriptions of Israelite literature and literacy and to construct relative chronologies of biblical compositions with greater accuracy than has been possible until now.