François Pierre (de) La Varenne (1618 – Dijon 1678), Burgundian by birth, was the author of Le cuisinier françois, the founding text of authentically French cuisine. La Varenne broke with the Italian traditions that had revolutionized medieval French cookery in the 16th century. La Varenne was the foremost member of a group of French chefs, writing for a professional audience, who codified French cuisine for the age of Louis XIV.
Edited by

Philip and Mary Hyman are historians specializing in the study of cookery and cookbooks in France and are the acknowledged authorities on La Varenne. They are the authors of several books on French food published in both English and French.

The French Cook, 1651, is the most important cookery book of the 17th century. It was the first recipe book to receive international acclaim, and European cookery was changed, through its influence, for many centuries to come.

This revolutionary recipe book was written by the foremost members of a group of French chefs who wrote for a professional audience in the age of Louis XIV. Little is known of his life or if he himself was responsible for the considerable innovations that appear in his book, but he was certainly the first to write them down. The first translation into English of the second 1652 edition, made in the following year by a certain I.D.G., had a dramatic effect on English cooks and cookery writers. Recipes were adapted to meet English taste and, although there was some later resistance from native cooks such as Hannah Glasse, English food was never to be the same again.

This culinary revolution rejected the heavily spiced flavours of the cuisine of the Middle Ages which tended to mask the natural flavours of foods and replaced them with the use of local herbs. Likewise, sweet and sour combinations were abandoned along with the heavy use of sugar outside of desserts. New vegetables appeared. Greater attention was paid to freshness and visual appearance. This is summed up in a saying by Varenne, “When I eat Cabbage soup, I want it to taste like cabbage.”

La Varenne’s innovations have now become part of our repertoire, including his omelettes, ragouts, bisques and caramel, new ways of flavouring dishes and many new technical terms, such as au bleu and au naturel. 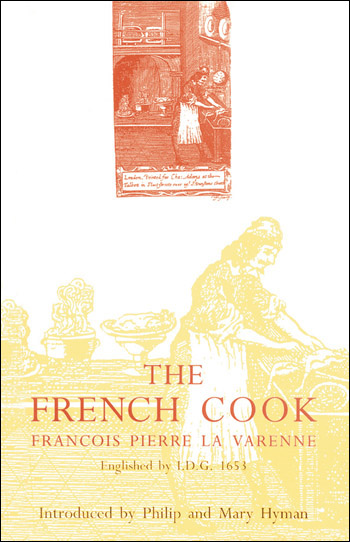