Ibn 'Arabi and the Contemporary West

Beshara and the Ibn 'Arabi Society

Isobel Jeffery-Street studied for a BA Honours degree in Theological Studies and a doctorate in Islamic Studies at the University of Exeter. She has tutored in Islamic Studies for the ­University’s distance learning course as well as being co-ordinator of the Exeter Inter-Faith Group.

The influence of Ibn ‘Arabi, the 12th century Andalusian mystic philosopher extended beyond the Muslim world from Spain, to China, to Indonesia. Interest in Ibn ‘Arabi in the west has grown over the last century. Ibn ‘Arabi and the Contemporary West examines ‘Arabi’s teachings through the work of the Beshara Trust and the Muhyiddin Ibn ‘Arabi Society. The study investigates how the Beshara School has used Ibn ‘Arabi’s teachings in assisting a range of students from around the world towards personal, spiritual development and how the Muhyiddin Ibn ‘Arabi Society has evolved into an international organisation with increasing influence in both the West and the Muslim world.

Acknowledgements [+–] ix – x
The influence of Ibn ‘Arabi, the 12th century Andalusian mystic philosopher extended beyond the Muslim world from Spain, to China, to Indonesia. Interest in Ibn ‘Arabi in the west has grown over the last century. Ibn ‘Arabi and the Contemporary West examines ‘Arabi’s teachings through the work of the Beshara Trust and the Muhyiddin Ibn ‘Arabi Society. The study investigates how the Beshara School has used Ibn ‘Arabi’s teachings in assisting a range of students from around the world towards personal, spiritual development and how the Muhyiddin Ibn ‘Arabi Society has evolved into an international organisation with increasing influence in both the West and the Muslim world.

BULENT RAUF [+–] 35 – 53
The Beshara Trust was established in 1971 around the central gure of Bulent Rauf. Rauf was ‘consultant’ to the Trust and its school from this time until his death in 1987. He was also instrumental in the founding of the Muhyiddin Ibn ‘Arabi Society in 1977. Bulent Rauf was a highly educated scion of an aristocratic Ottoman family, who before becoming ‘consultant’ to the Beshara School had lived a life that moved between extremes of wealth and grinding poverty. These extremes of experience prepared him well for his later spiritual life, and allowed him to work effectively and closely with a broad spectrum of Beshara students.

THE BESHARA TRUST: EARLY YEARS [+–] 54 – 73
The present chapter traces the evolution and the activities of the Beshara Trust and its school from Bulent Rauf’s arrival in England in 1967, to the Trust’s inception at the time of the purchase of Swyre Farm in 1971. It describes how the foundational study text of the school was produced, and gives a summary account of the early participants. It also situates and relates the Trust to other scholars and teachers, such as Titus Burckhardt and J.G. Bennett, who were active in promoting Su ideas in the West in the early half of the twentieth century. This chapter, like the previous one, provides some prime examples of unusual spiritual circumstances in the emergence of the Trust. These I have set out through the usual approach of phenomenological students of religion who are familiar with these types of incidences and apparent co-incidences during the emergence of new spiritual movements in all historical settings and traditions.

CHISHOLME AND SHERBORNE: THE INTRODUCTION OF STRUCTURED, RESIDENTIAL COURSES [+–] 74 – 88
Once Bulent Rauf was constantly in residence at the Beshara Centre at Swyre Farm as its consultant (from the winter of 1972/73), it began to become apparent to him that the esoteric education offered at the centre required a more formal structure. Up until that time, when the teachings of Ibn ‘Arabi began to become central study material at the school through his introduction of The Twenty-Nine Pages and the Wisdom of the Prophets,1 a wide range of spiritual and religious themes had previously been offered for study there. But once he had established the focus of study on Ibn ‘Arabi, many less interested students dropped away. This was when Bulent Rauf devised the rst long residential course, which still follows a similar structure today to that which he inaugurated in 1975. That core intensive course was built around the four spiritual disciplines that were already central to the work of residents at Swyre Farm—work, study, mediation and devotional practice. This chapter discusses the structure and detail of the new intensive courses, beginning with the acquisition of two new sites for the courses.

AN INTRODUCTION TO THE TEXTS AND TEACHINGS OF IBN ‘ARABI USED FOR STUDY BY THE BESHARA SCHOOL [+–] 89 – 127
This chapter provides summaries of the principal texts and teachings of the works of Ibn ‘Arabi used for study by the Beshara School. The first part of the chapter discusses themes drawn from The Twenty-Nine Pages and the Wisdom of the Prophets, both of which illustrate Ibn ‘Arabi’s key mystical and metaphysical ideas extracted from his most important and inuential works: the Bezels of Wisdom (Fusûs al-Hikam) and the Meccan Revelations (al-Futûhât al-Makkiyyah). Also included in this section are some comments and discussions related to these principle themes extracted from William Chittick’s recent book Ibn ‘Arabi: Heir to the Prophets. Although Chittick’s works are not central to the study of Ibn ‘Arabi by the Beshara School, the extracts were chosen because they offer a concise and comprehensive rendering of Ibn ‘Arabi’s central teachings, and were added since the completion of the original doctoral thesis in 2003. The intention in doing this is to provide the general reader with additional clarication of some of the complicated themes encountered. The latter part of this chapter discusses other key texts, primarily those produced by Ibn ‘Arabi’s original followers, as well as other Su ‘classics’ used for study at the school.

RECENT BESHARA EDUCATION: THE COURSES AND THEIR AIMS [+–] 128 – 141
This chapter reects on what Beshara means to those involved with the school and in the light of this discussion then focuses on the courses and their aims.

STUDENT EXPERIENCES DURING AND FOLLOWING THE COURSES [+–] 142 – 175
This chapter begins with a brief discussion of student backgrounds and the reasons that are commonly given for their decision to enrol on one of the courses.1 It then proceeds to an examination of some of the students’ experiences of the courses, following which it concludes with a selection of case studies outlining how the experiences of these courses continue to affect the daily lives of the former students and those people with whom they have contact.

THE PILGRIMAGE THROUGH TURKEY [+–] 176 – 203
As throughout this study, I have attempted to cover as accurately and fairly as possible the students’ reactions at shrines and sacred places, and to the journey as a whole, leaving those experiences to ‘stand on their own’ without applying any value judgments.

OUTREACH [+–] 205 – 230
This chapter outlines the ways in which the Beshara Trust has produced and expanded its outreach and publicity through a wide range of initiatives with the view of generating increased public awareness, both nationally and internationally, of the activities of its school and its wider aims. The chapter addresses the Trust’s response to those challenges to the school during its early development and at its more established stages. In addition it provides a selective overview of some of the ways in which the school understands its principles to relate to concepts and projects exemplied across a range of creative, scientic and academic disciplines, communicated primarily through its newsletters, its magazine and its more recent website.

Ibn Arabi and the Contemporary West tells several remarkable and intertwined stories. In the context of Islamic Studies, it recounts the recent transmission of universal spiritual teachings that were once central to the spread of Islam as a world religion and civilization, but then were lost and often rejected in the aftermath of colonialism, to the UK and the wider English-speaking world; and it concludes with the unexpected ways that spiritual heritage is now being rediscovered by new generations across the Muslim world. In that new, global setting, this study also sketches the background of the multi-faceted, increasingly global adaptation of Ibn 'Arabi’s teachings—which for centuries had helped integrate and inspire the burgeoning creative expressions of the Islamic humanities and spirituality across Asia and Africa—by contemporary artists and thinkers working in many of those same fields today: including philosophy, ecology, architecture, psychology, spirituality, and religious thought. And on a more human, immediate level, this is the story of the lasting inspiration and personal influences of a single quiet spiritual teacher and those he inspired, detailing the formation, teachings, and expanding development and outreach of the Beshara movement.
Professor J. W. Morris, Boston College

The historical chapters draw on interviews with participants as well as on written sources, and the anthropological chapters draw on participant observation at the Beshara centre in Scotland and on a Beshara trip to Turkey, as well as on interviews with participants, sometimes quoted at length. All these chapters are well researched and well written, and provide a wealth of fascinating information. The book is thus strongly recommended to all who are interested in Western Sufism or in Christian–Muslim relations.
Islam and Christian-Muslim Relations

Recommended to readers who want to get acquainted with the Beshara School's ideology and history.
Die Welt des Islams 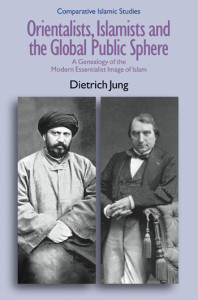