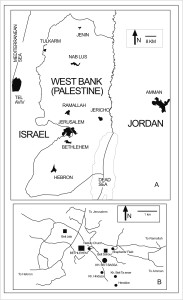 Khirbet Beit Bassa is an archaeological site located in Beit Sahour, in the district of Bethlehem in Palestine. The site is located on a low hilltop located approximately 3 km to the southeast of Bethlehem, one kilometre southwards from Beit Sahour and about 10 km to the south from the Old City of Jerusalem. The area is archaeologically very relevant, as it also features a range of historical sites from different periods: the Herodion, Khirbet Hindaza and Khirbet Beit Ta‘mar to the south, the Nativity Church to the northwest and Shepherd’s Field to the north.

Khirbet Beit Bassa was first mentioned as a “ruined khān, cistern and tombs” in Conder’s and Kitchener’s Survey of Western Palestine (1883:87). Two salvage excavations were carried out in the site: the first one under the auspice of the Israel Antiquities Authority in 1994 (Barokh and Shorukh 1998), and the second one at the request of the Ministry of Tourism of the Palestinian Authority in 2008. The first excavation documented a burial place with a carved sarcophagus dated to the Roman period, although this has not been found again in subsequent excavations. The Palestinian excavation unearthed a Byzantine wine press which has been restored and it is preserved as a public display nowadays. None of these previous excavations managed to offer a comprehensive history of the site and of its relation to its archaeological environment.

In 2009 the first campaign of systematic excavation of the site took place under the direction of one of us (Ibrahim Abu Aemar), then Director of the High Institute of Archaeology of Al-Quds University. Subsequent campaigns took place in 2010, 2013 and 2014. In the last year Jose C. Carvajal Lopez of UCL Qatar joined as co-director of the research. The four campaigns between 2009 and 2014 have served to underline the interesting history of Khirbet Beit Bassa, the most relevant periods of which, according to our current knowledge of the pottery(Abu Aemar and Carvajal forthcoming), seem to have been the late Roman period (between the 3st and the 4rd centuries CE, known as early Byzantine period in the region) and most especially the Byzantine and early Islamic transition, arriving as far as the ‘Abbaṣid period (6th to 10th centuries CE). No clear remains of the khān mentioned by Conder and Kitchener have been located, but surface finds and Islamic burials towards the south of the site suggest that there was later occupation periods, perhaps without any building activity. The area has been clearly altered by recent terracing and clearing, since the hilltop appears divided in parts by lineal stone barrows which possibly separate different allotments. 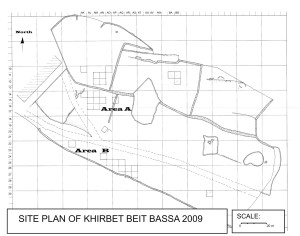 The site has been divided in two areas, named A and B, located respectively in the submit of the hill and in the southern slope. Excavations in Area B unearthed the remains of a defensive wall made in regularly-faceted stones of a range of sizes (though always large) bonded with mortar and with an average width of 1.23 m. Built over the bedrock, the wall runs in an east-west direction, although in the western part it shifts to a more northwest to south west direction, appropriate to surround the hilltop. The wall has another obtuse, inwards angle that does not affect significantly its direction. It is approximately in the centre of the segment that has been discovered. This strange angle could be explained by reasons of topography. It would create a clear weak point in the defense, and that would explain the remains of a possible circular external tower that was attached to that point in the wall. The archaeological levels around the wall were disturbed in a later period by the burial of Muslim individuals nearby. 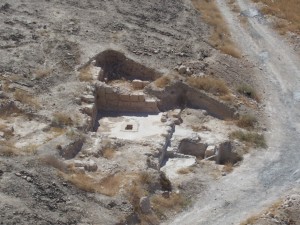 The excavations in Area A have yielded even more interesting results. Towards the west there are the remains of a residential area, a network of houses and streets which are unfortunately very poorly conserved. The walls, made of earth-bonded masonry, rarely conserved more than one or two rows of stones. Towards the east, near the centre, the remains of another possible wine-press have been found near a collapsed building. The latter conserved inside a small cistern made of asingle stone container that might have been a baptism font. The superficial layers in this part of the site conserved chalk-made floors that seem to have been used as a surfaces for tents, with associated pottery dating to the ‘Abbāṣid period. Finally, more towards the centre, near the summit of the hill, remains of a monumental building with collapsed parts have been found, with the remains of a millwheel reused as part of the floor inside. Immediately north from this building is another defensive wall, quite well conserved, because it has been reused as support for later terracing. This wall seems to be a different one than that discovered in Area B, the continuation of which would run at a lower level in order to encircle the whole summit. Coming back to the segment of the wall discovered in Area A, the 2014 campaign unearthed a possible gate which would give direct access to the monumental building on the top.
The excavations have clearly shown that this a production site of some significance, given the wine presses and the millwheel. The double defensive wall is an element that still needs clarification, and the pottery retrieved in the most recent campaign will be useful to date its construction. Equally, ongoing pottery studies will reveal more precise dates for the collapse of the houses and of the monumental building and the subsequent phase of tent occupation (up to now, only the pottery for the campaign of 2009 has been studied with some detail). 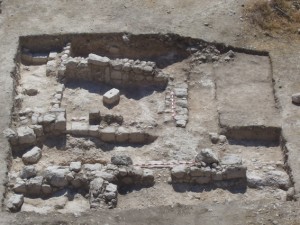 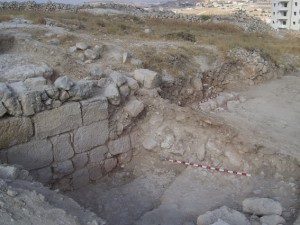 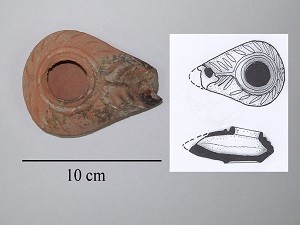 Acknowledgements:
The research on Khirbet Beit Bassa is done with the permission of the Directorate of Antiquities of the Ministry of Tourism of the Palestinian Authority. The project is currently funded by the Al-Quds University. The excavation and documentation work is carried out by members and students of the High Institute of Archaeology, and in the last campaign a student from UCL Qatar and another one from the University of York joined in. UCL Qatar collaborated in the travel and the accommodation of JCL and these students.The authors wish to extend their acknowledgement to all these institutions and individuals.