Francis Gooding is a writer and researcher who has published widely on art, music and film. He worked as author and researcher on the Colonial Film: Images of the British Empire project (colonialfilm.org.uk), and is a member of the British Empire at War Research Group. He is a contributing editor to Critical Quarterly magazine, and is the author of Black Light: Myth and Meaning in Modern Painting (Blackwells, 2009).

Thunder In Their Hearts is the first full account of South African jazz music in Britain. In 1961, when the celebrated township musical King Kong arrived in London, it brought with it a cast featuring some of South Africa’s brightest jazz stars. Many of them never went home. Instead they became the first wave of South African musicians to flee the oppressive South African apartheid regime for exile in Britain. In the years that followed they would be joined by many of their compatriots, both musical and political. Exile jazz and exile politics were closely connected, and music was an important part of the cultural and political battle against apartheid. Looking in detail at seminal groups such as the Manhattan Brothers, Chris McGregor’s Blue Notes, and Jabula, Thunder In Their Hearts traces the lives and careers of some of South Africa’s most gifted and celebrated artists, documenting the impact of the South African exiles on British and European jazz, and articulating the links between music and the political struggle. From the London success of King Kong until the fall of apartheid, South African jazz musicians played, lived and campaigned in Britain: Thunder In Their Hearts is the first book to tell their story.

South Africa: Jazz, Apartheid, King Kong [+–]
This introductory chapter that introduces the background to SA jazz in exile; providing important musical context, and tracing the complex link between South Africa and Britain and examining South Africa within and without the British Empire. It looks at early musical (and political) South African visitors to the UK (e.g. Thomas M) and discusses race and segregation pre & post 1948, the birth of oppositional African politics and the ANC, and the beginnings of their message abroad, the international roots of SA jazz and popular music, political theatre in South Africa, genres such as jive and mbaqanga; most significantly, jazz developments up and including to the Jo-burg triumph of the King Kong musical.

King Kong in London: the late 1950s and early 1960s [+–]
This chapter looks at London in the 1950s: jazz, immigration from the crumbling Empire, and the London scene. The King Kong musical come to London, and brings with it the first significant wave of passing and permanent jazz exiles, with members of the Manhattan Bros, Gwigwi Mrebi, Gwangwa & Masekela, Peggy Phango, Kippie M, Todd Matshikiza, and others all in London for the show. The period marks the beginning of the Anti-Apartheid Movement in the UK (the ‘Boycott Movement’, from 1959). Iconic events such as the ‘wind of Change’, Sharpville, Umkhonto, and the expulsion of South Africa from the Commonwealth. Sanctions, and Resolution 1761. (Arrival of Abdullah Ibrahim and Sathima in Europe with M Nshoko and Johnny Gertze.) are all surveyed alongside a focus on the Manhattan Brothers.

Very Urgent: the 1960s [+–]
This chapter starts off with a look at The Blue Notes — their background, their south African successes, and their arrival in Europe and at how the Anti-Apartheid Movement (AAM) is beginning to make its presence felt in domestic politics as the British empire dissolves. The British jazz scene in the 1960s is discussed including the significance of clubs such as Ronnie Scotts, the Very Urgent LP and the developing draw of more open music alongside a chronicle of the developing political context including AAM activities on the international front.

Blue Notes for Mongezi: 1970s [+–]
This chapter continues to chronicle the Blue Notes including European tours. It looks a the ‘Kilburn scene’ both for its political and musical significance and traces developments in British jazz including the second wave of free players and the significance of the Brotherhood on the British scene and the lives of various artists and poets in London.

Jabula: 1970s [+–]
This chapter looks at the arrival of the second wave of jazz exiles in 1970s, including the core members of the highly political Malombo Jazz Makers, Julian Bahula and Lucky Ranku, who had been at the forefront of the Black Consciousness movement and toured with Biko; the foundation of Jabula, and its very close connection with the AAM and ANC. It also chronicles the arrival of Ernest Mothle, Mervyn Africa, Ipi Ntombi, Pinese Saul, their link-up with existing exiles in the UK and the political scene in London. It describes the contemporary musical and political developments in SA, including A Ibrahim’s return to South Africa to found as-shams, the 1976 uprising, and the phenomenon of alcoholism and depression in London among exiles. Finally, it looks at the Increasing musical links with continental solidarity movements, spearheaded by Jabula.

London Township: the 1980s [+–]
This chapter portrays the high profile of the South African cause within the London scene (such as 100 Club; Bahula’s Jazz Afrika) as well as developments in continental Europe.and the growing status of Nelson Mandela. Thatcher’s Britain and attitudes towards South Africa are examined as a political solution emerges and the ANC is ‘unbanned’ and Mandela is released.

Spirits Rejoice [+–]
This chapter looks at the end of apartheid and its aftermath and at those who returned home, how they integrated back into the South African musical scene and those who remained abroad. 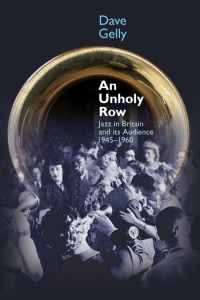